RUSH: I was shouting during the press conference, “Tell 'em why, tell everybody why!” Because this is fundamental. It's not enough just to say that everybody's picking our pockets and that everybody's depending on us. Why have we allowed this to happen? Contrary to what the president says, our leaders in the past have not been dumb and stupid in this area. They have been compliant.

They have been compliant. They have been in agreement with the idea that as a superpower, we already have an unfair advantage and so it's okay if some nations take advantage of us because that's how it ought to be. We ought not be able to dominate and rule everything. And this is where Trump was able to make inroads with the whole idea of Make America Great Again. 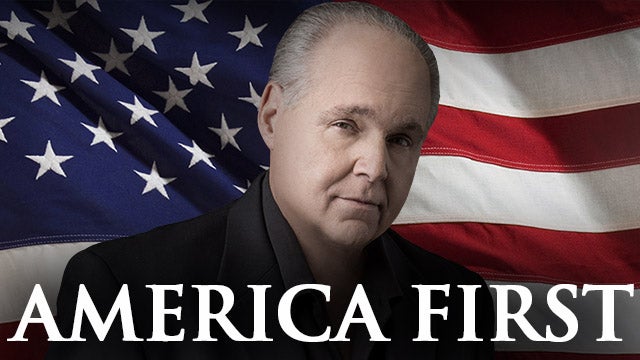 The acknowledgment that we're the big kid on the block, the acknowledgment that we are the world's superpower led because of political correctness and guilt and any number of other things that liberalism permeates, led to the belief that, "Okay. We deserve to be paying more in NATO. It's okay if we have a $500 billion trade deficit with the Chinese 'cause it's what it takes to have peace with the Chinese.”

We don't want to make anybody mad at us is the fundamental building block of foreign policy that we've always had. We don't want to make anybody mad. After 911, what'd the State Department do? The State Department had a symposium on why do they hate us so much, why did they do to us what they did on 9/11? What is it about us that made them do this? As though it's all our fault.

And the conclusion is, well, we're a superpower. It's only natural they'd be afraid of us. It's only natural they would resent us. And so we've got to demonstrate that they don't have to resent us and that they don't have to be afraid of us and so we'll take it on the chin in trade deals and we'll take it on the chin with NATO. This is the belief system.

Well, this little set of beliefs, these philosophies have roiled the Washington establishment. They cannot abide this. They hate this. They want a United States which walks around feeling a bit of guilt over our superpower economic status. They want a world order where the United States becomes the provider rather than the generator. It's a big difference when you treat nations of the world like they're a welfare recipient instead of generating enough wealth and economic activity where other nations can join the party and benefit from it. And that is the Trump philosophy.

They were able to screw up their cultures with massive liberalism, directing things like new immigration policy and cultural upheaval because they were able to create these massive welfare states where politicians in these countries could buy their power. In the process, they set themselves up for a massive invasion by illegal immigrants from around the world, migrants and so forth, all because they didn't have to contribute to their own defense. They knew if anything untoward happened we'd come riding in as the cavalry.

Trump said those days are over. This has been the world order since World War II, folks, since the late 1940s. And I'm gonna tell you, Trump is upsetting this applecart like he's upsetting every other applecart that he's decided to push. And they are beside themselves. Because they see Trump as obliterating and turning upside down this world order that they all and their descendants, their forebears, established long ago that has been established given United States policy no matter which party's been in the White House.

Trump's looking at this and says it makes no sense, dollars-and-cents-wise, it makes no economic sense whatsoever, and it's weakening us, and there's nothing about this that contributes to American greatness. So he's blowing all this up. And rewriting trade deals and rewriting participatory deals such as NATO and so forth.

RUSH: Last night at the rally in the Florida Panhandle Trump brought up all these supposed war leaders who called Joe Biden and begged him to run for president. Biden's out there saying all these world leaders are calling me. John Kerry said the same thing. Kerry said they're all urging me to run, back in 2004. I guess this is part of the Democrat Party playbook to say leaders around the world are calling me, begging me to run against this horrible Republican 2004, George W. Bush. 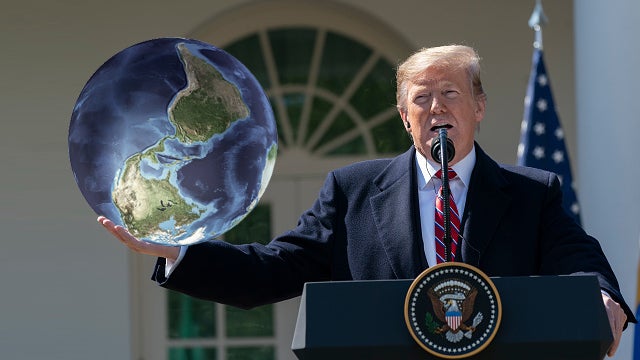 You've all heard about, quote, the New World Order. Well, broom that from your conspiratorial minds. There is a world order. There is an order that was set up after World War II. McCain referred it during the 2016 primary when Trump's out there running. McCain was saying: why would we want to elect anybody that's gonna destroy this order that we set up, that we are running after World War II? It was a great thing.

Well, this order, this world order had us apologizing for being a superpower and had us knowingly getting the short end of deals 'cause it was thought it was the only way to be fair. Since we're the richest nation in the world just like there can never be an American leader at the United Nations. The general secretary at the United Nations can never be an American. Why?

That's us trying to demonstrate how fair and how understanding we are of the plight of the have-nots around the world. The point is the world order that Trump is rearranging had the United States willingly playing a less than honest and powerful role in the world, all to show we didn't mean anybody any harm. It was a crock.